Roman Perucki is principal organist of the great cathedral of Oliwa in Gdańsk as well as the general director of the Polish Baltic Philharmonic Concert Hall. He is the artistic director of the annual International organ music series in the cathedral in Oliwa and of the international J.P. Sweelinck Competition, as well as other international organ-music festivals (in Gdańsk, Frombork, Jastarnia, Stegna, Rumia, Jastrzebia Gora and Zarnowiec). Perucki has to date played more than 2000 organ concerts: solo recitals, as well as with accompaniment of chamber and symphonic orchestras, soloists and duo-concerts with his wife Maria Perucka (violinist) with whom he has performed throughout Europe, Russia, Japan, Canada, Mexico, USA and Australia. His performances have included recitals in Notre Dame, Paris and Ghent cathedral, Mariinski Theater in St. Petersburg. He has also given lectures and master classes in Poland, Portugal, Mexico, Russia and France. He has recorded a numerous CDs and was awarded the Culture Prize from the Polish Ministry of Culture, and many prizes from the authorities of the city of Gdansk, and the high Vatican distinction “Pro ecclesiae et pontifice”, and KnighthoodOrder of St. Sylwester.

Maria Perucka graduated in violin from the State Music Academy in Gdańsk and has had a varied career as a soloist, chamber music and orchestral player. As a soloist, she has performed with the Kalisz Symphonic Orchestra; she is also leader of an early music group called the Cappella Gedanensis. She has performed in various churches and concert halls in Polish cities such as Warsaw, Krakow, Szczecin, Lublin, Gdańsk, and cities in Germany, France, Italy, Belgium, Finland, Sweden and Norway, with other soloist and organists. She has recorded many CDs with trumpeter Janusz Szadowiak, soprano Danuta Mossakowska-Dulska and Roman Perucki, organist. She records also for radio and television.

Adoration for violin and organ 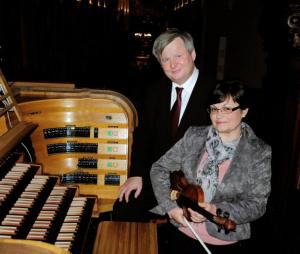