A Touch of Papal Splendour

Juan Paradell Solé is the titular organist of the Sistine Pontifical Chapel Choir and as such performs regularly at the liturgical celebrations conducted by the Pope at St Peter’s Basilica. He is also first organist of the Pontifical Basilica of St Mary Major. He holds the positions of professor of organ and Gregorian chant at the ‘L. Refice’ Music Conservatory in Frosinone, and he is honorary president of both the Association ‘Settembre Organistico Fabrianese’ and of the Association Les Amis de l'Orgue Merklin d'Obernai’ (Alsace).

He has recorded for Italian national radio and television,Vatican radio, German Radio of Berlin, Bayerischer Rundfunk, Radio S. Paulo of Brazil and Catalunya Music. Along with the “Polifonisti Romani” choir he has made two CDs of the music of  L. Perosi and V. Miserachs. He has also recorded a duet organ CD under the French label Pamina, other  and has made several several CDs and DVDs with the Sistine Chapel Choir. 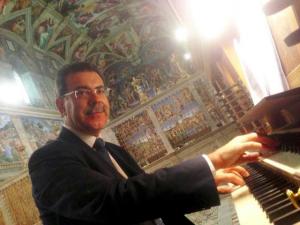