Eric Sweeney is organist and choirmaster of Christ Church Cathedral Waterford and was head of music at WIT up to his recent retirement. He began organ lessons while still a choirboy at St Patrick’s Cathedral in Dublin, studying with the cathedral organist W.S. Greig. He later studied with Flor Peeters in Belgium and, with the aid of an Italian Government scholarship, with Fernando Germani in Rome. He has given recitals throughout Ireland as well as in England, Sweden, Italy, France, North America and Canada. His programmes reflect a special interest in contemporary music. Sweeney is well known also for his organ improvisations to silent movies which include The Phantom of the Opera, Dracula and Nosferatu. He collaborated with the rock group 3epkano for an improvisation to the 1930s classic film The Cabinet of Dr Caligari at the Kilkenny Arts Festival in 2011. Since 2012 he has been collaborating with poet Mark Roper and photographer Paddy Dwan in a series of concerts featuring their work. Mark and Eric also collaborated in a series of creative writing and composing workshops for secondary schools from 2012 to 2013 that culminated in a special concert of student work as part of Waterford New Music Week in February of this year. Eric and Mark first worked together when they were commissioned to write a work as part of Come the Sails to celebrate the Tall Ships Race in Waterford.Their work, for massed choirs and orchestra, was performed on 30 June 2010.

Mark Roper is an English-born poet now living near Piltown in Co. Kilkenny. His first collection of poetry The Hen Ark (Peterloo 1990) won the 1992 Aldeburgh Prize for best first collection. He has published 6 collections since then. A Gather of Shadow (Dedalus 2012) won the Michael Hartnett Award in 2014 and was shortlisted for The Irish Times ‘Poetry Now’ Award in 2013. Mark Roper’s latest collection is Bindweed (Dedalus 2017), hailed on the RTE website as ‘a very fine collection, surely one of the best poetry collections published this year’. The River Book: A Celebration of the Suir, a collaboration with photographer Paddy Dwan, was published, to much acclaim, in 2010. A second collaboration with Paddy Dwan, The Backstrand: Tramore’s Open Secret, was published in 2013. The pair are currently at work on a book about the Comeragh Mountains. An experienced Creative Writing teacher, Mark has run courses and workshops in many different settings, including schools, prisons, and senior citizen centres. From September 2002 to May 2003 he was writer-in-residence at Waterford Regional Hospital.

Kyrie and Postlude from the Mass of St Patrick (2007) 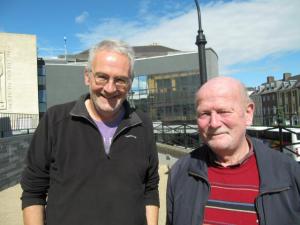