Raymond O’Donnell has been organist and director of music at Galway Cathedral since 1994. A native of Dublin, he studied organ with Prof. Gerard Gillen at St Mary’s Pro-Cathedral where he was organ scholar for three years. He read Music and Mathematical Physics at Maynooth University, and graduated with a First Class Honours MA in organ performance in 1991. While an undergraduate he won a scholarship to the University of Louisville, Kentucky, where he studied organ with the late Melville Dickinson for one year. He has also participated in masterclasses with eminent international figures such as Marie-Claire Alain, Daniel Roth, Ben Van Oosten and others.

Raymond founded a flourishing annual series of organ recitals in Galway cathedral in 1994, and in more recent years he has been responsible with organ builder Trevor Crowe for a major reordering and enlargement of the cathedral’s fine symphonic west gallery organ. Raymond has been a part-time lecturer in music at Maynooth University since 2007. In addition to his career in music, he is active as a computer programmer; he also holds a private air pilot’s license.

Michael Vignoles has been playing the Irish uilleann pipes for the past 30 years. Born in the Claddagh area of Galway city, Ireland, he started an apprenticeship as maintenance fitter and later went on to making uilleann pipes and bodhráns. Michael plays regularly at local traditional music venues in Ireland, Europe and the USA. He also gives demonstrations on the instruments he makes to primary and secondary school students across Ireland. He has been a member of Galway Cathedral Choir for the past 20 years, and occasionally performs on the pipes in concerts and events with organist and musical director Raymond O'Donnell.

The march of the King of Laois 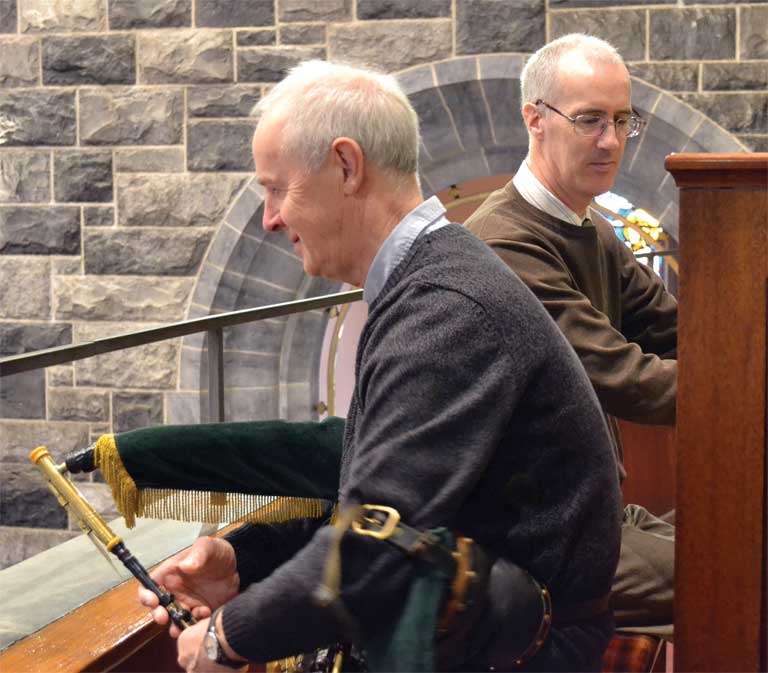